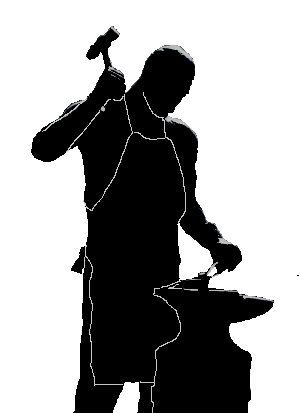 Föreningen för Smedsläktsforskning – FFS is an organisation especially focusing on research on old iron works and about blacksmiths and their families with roots in Sweden since the 1650s. The Swedish iron and steel industry has a long history beginning already in the Middle Ages.

FFS was founded in 1994 and its main task has been to create and publish a database of blacksmiths and their families. In August 2021 it contained information on more than 330 000 persons and is still growing. Since 2012 the organisation has so far produced a new version of the database every other year on a usb flash drive.

Based on members’ research FFS have edited 34 leaflets on blacksmith families during the years. Starting in 2013 the organisation has published nine books with information on old iron works throughout Sweden since the late 17th century. Each book focus on identified parts of Sweden (landskap) viz Västmanland, Värmland, Södermanland, Närke-Östergötland, Dalarna and Uppland. The book on the region Västra Götaland includes Bohuslän, Dalsland, Halland, Västergötland and the region Norrland includes Gästrikland, Hälsingland, Härjedalen, Medelpad, Ångermanland, Jämtland, Västerbotten, Norrbotten. With the ninth book, the organisation has covered the whole of Sweden.

All written material is in the Swedish language. If you are interested in more information or have any questions, please  contact a member of the board or send an email to smedjan@smedforskning.se